Time to get domesticated!

This is Part 5 of the iSideWith Quiz Review: Domestic Policy Issues. From what I can tell, this is approximately halfway through the quiz. And I don’t think this section is quite as long as Part 2 or Part 4. So….on with it already! 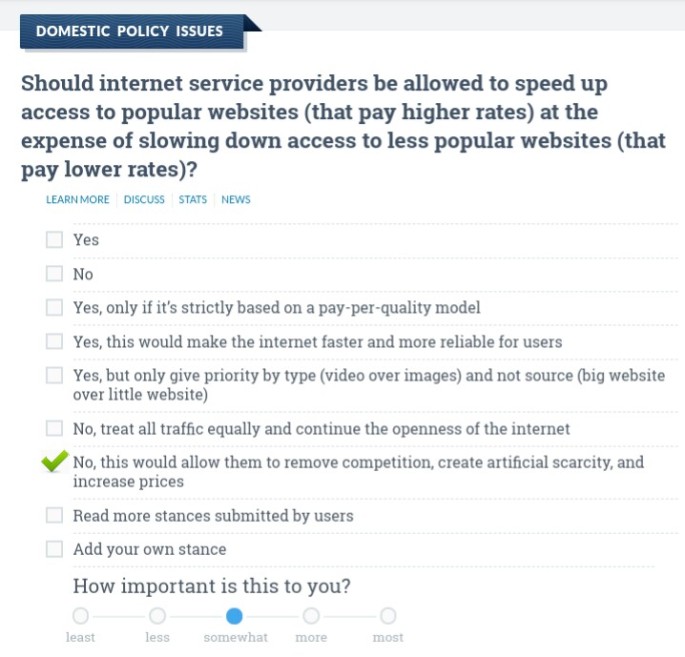 Should there be more restrictions on the current process of buying a gun?

While restrictions on gun ownership may lower the rate of gun violence, the overall rates of violence are largely unaffected by gun laws. Most mass shootings, the primary driving force behind gun restrictions, occur in places that already have strict gun laws. The restrictions do nothing. Besides, the occasional “mass” shooting pales in comparison to the havoc wrought by our industrialized military.

Should teachers be allowed to carry guns at school?

Personally, I’m not much of a gun person. I prefer multi-purpose (which Google autocorrected to “muktipumulti”) household tools and utensils. Knives, hammers, fire pokers, etc. But I would use a gun if necessary, and I should have that right. You should too. Whatever helps you protect yourself, your friends, and your family. 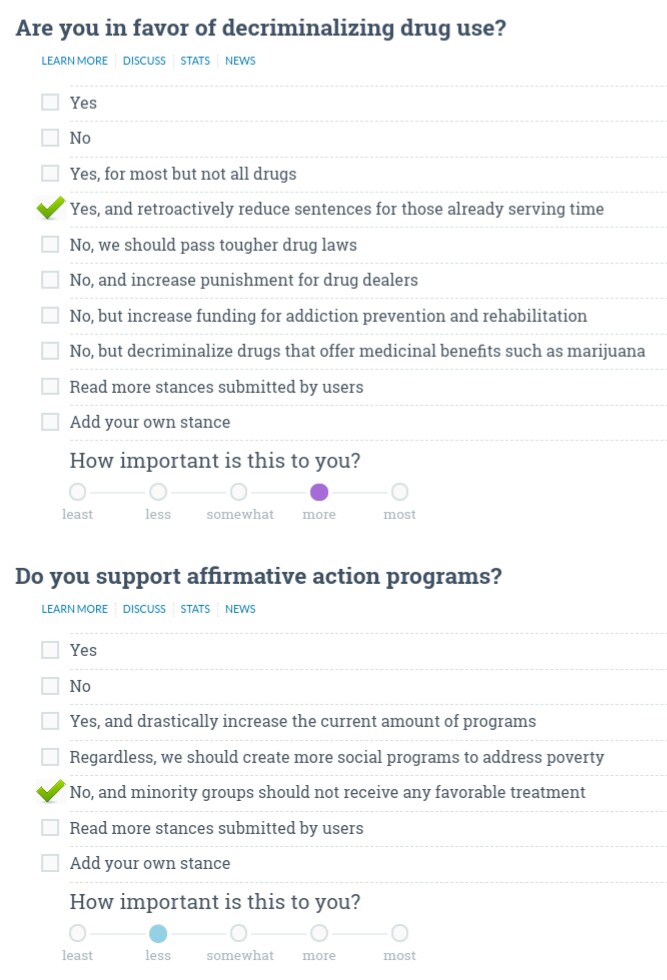 Are you in favor of decriminalizing drug use?

Yes. I’m in favor of abolishing all restrictions on drug use, manufacture, and distribution. Prohibiting alcohol didn’t work, prohibiting caffeine wouldn’t work, nor is prohibition working for any other drug. Drug laws do little but feed the prison system our downtrodden young men. This would also render a doctor’s prescription unnecessary and meaningless, which would hopefully shed light on the security theater provided by these pill-pushers.

Do you support affirmative action programs?

No. To provide favorable treatment to one group is to discriminate against another group. In other words, life isn’t fair. But at this point, women have MORE rights than men in Western nations, while race and sexuality are far too fluid for relations to be governed by legislation. You should have the right to discriminate against certain races, while I should have the right to hire people based on hair length.

Should local police increase surveillance and patrol of Muslim neighborhoods?

No. Actually, our police and military should decrease surveillance for ALL neighborhoods. Privacy is precious enough already.

Should there be term limits set for members of Congress?

Yes. Their terms should ALL be limited to just a few more years. Really though, it doesn’t matter; the people really in charge are unaffected by term limits. Not that I see all politicians or businessmen as evil and conniving, I simply believe affluence is as unhealthy as poverty. Wealth truly seems to corrupt. 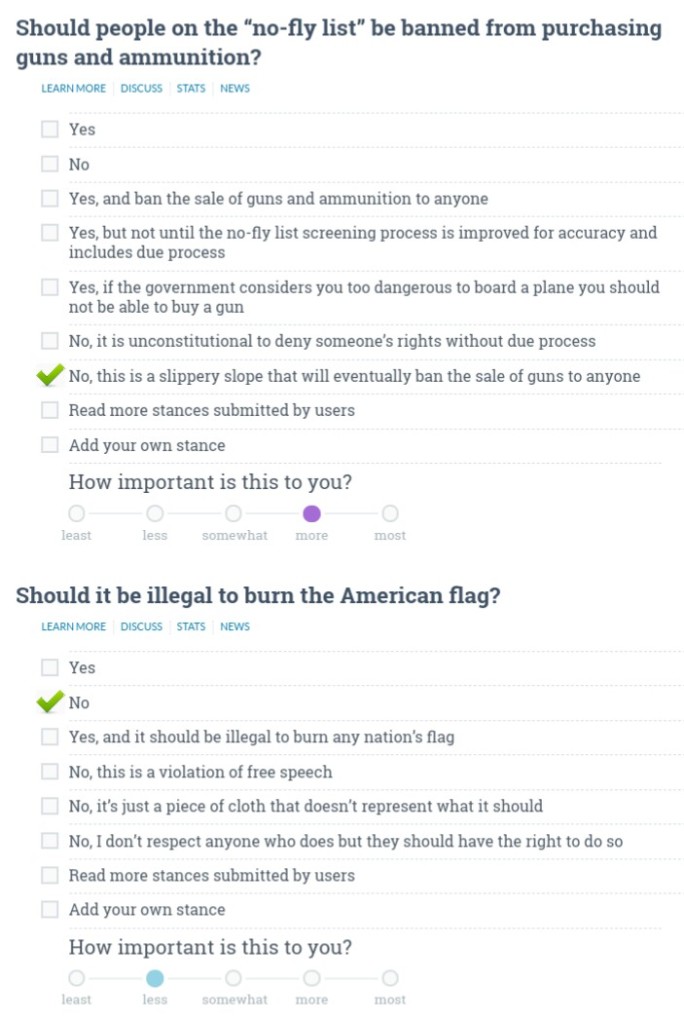 Should people on the “no-fly list” be banned from purchasing guns and ammunition?

No. Body scanners, metal detectors, and no-fly lists are little more than security theater. Most attacks are foiled by airline staff or passengers. Enforcing a no-fly list necessitates more surveillance and other police activity, which we really do NOT need more of.

Should it be illegal to burn the American flag?

No. I personally find it rather distasteful, but not because of any patriotic sentiment; I simply find the American flag aesthetically pleasing, just as I find the Confederate flag aesthetically pleasing, and to burn either would be a waste of art. And a waste of free speech. There are better ways to use your (dwindling) right to free speech, such as commenting on my blog.

Should the government regulate social media sites, as a means to prevent fake news and misinformation?

No. The government is a monster of lies. Regardless of whether our leaders “should” do this or that, both sides of the political aisle already have a hand in what we see online.

Should the NSA (National Security Agency) be allowed to collect basic metadata of citizen’s phonecalls such as numbers, timestamps, and call durations?

No. But just because they should don’t mean they will. Like it or not, the government will most likely collect our data regardless. Or buy it from tech giants like Facebook and Google.

Should victins of gun violence be allowed to sue firearms dealers and manufacturers?

Yes. Sure. Sue whoever the fuck you want, except me, please and thank you. If this little compromise will shut up all those anti-gun nuts, so be it.

Should the redrawing of Congressional districts be controlled by an independent, non-partisan commission?

No. Yes? I don’t really give a fuck. Any such “commission” seems highly dubious, as our society reaches a tipping point far beyond our grasp. No petty law against gerrymandering will solve our problems. Rather, I think we should all save our money, invest in food, medicine, arms, etc. Quit our jobs and stop feeding the machine.

Should the government be allowed to seize private property, with reasonable compensation, for public or civic use?

Noamount of money will ever compensate for the memories, the energy, all the little things that make your home or business YOURS. No one should be allowed to take that from you, no government, military, corporation, of individual. You fight them tooth and nail.

Should the government raise the retirement age for Social Security?

No. The government should stop garnishing our wages through taxes and social security. Those who’ve already lost money to social security should be paid back as soon as possible. But that ain’t gonna happen, eh?

Do you support the Patriot Act?

No. I’ve never been particularly patriotic. Seriously though, it doesn’t matter whether we oppose government surveillance. They’re watching us anyway.

Should the government pass laws which protect whistleblowers?

Yes. But that doesn’t mean they will. These laws would have some deleterious condition, a restriction on free speech or other such threat, that renders them practically pointless. Rather than giving special protection to whistleblowers, perhaps we should remove all special protections from law enforcement and government officials.

Should the US grant immunity to Edward Snowden?

Yes. Immunity should be granted to ALL criminals, starting with hackers, whistleblowers, drug offenders, petty thieves, and sex workers. Our prison system sucks. That said, so do some of the prisoners. 😉

Should the military upgrade Air Force One?

No. Probably not, it’s probably good enough. The president should be grateful just to have a goddamn private jet. But I really don’t care, because it makes little difference to me or my family. I TRIED to care, thought to myself “but what if the upgraded presidential fleet attacks my home?”….Nope. Just nope.

Only ‘The Mysterious Blogger’ on a Short Leash Knows for Sure!

About God, Faith, Family and Friends

Finding Hope, Healing, & the Heart of the Matter in Life's Chaoiticness

Articles and Books About Traditional Witchcraft and the Occult

I want to be rich. Rich in love, rich in health, rich in laughter, rich in adventure and rich in knowledge. You?

Supporting women who choose to stand without feminism

Neither here nor there

The latest news on WordPress.com and the WordPress community.